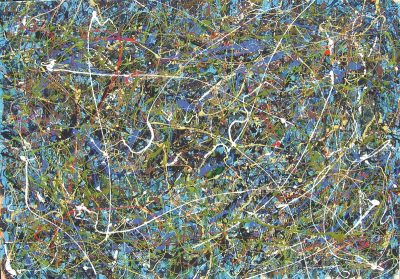 Let’s intimidate readers right from the start: paintings by Ana Kala are exemplary to meta-artistic substantiality creatively motivated with use of paint and canvas. If you’ve read it carefully, turn your attention onto a painting “Cosmic Forest”. What is that you see? The surface drenched in streams of colored paste. There’s no trace of brushstrokes. Without a hint of previous notion, a plan, or even idea where the soaking begins and ends.

Someone next to you wonders:  But, where is that forest? Where is the cosmos? Don’t listen to the sigh of shocked patroness, who as never before, acknowledges that Tiepolo’s fresco in palazzo Labia in Venice that she saw on her honeymoon journey truly belongs to the past era.  The madam is wrong. Kala’s painting is not a miracle that happened after but “before” Tiepolo’s miracle in the city on lagoons.

Yes, you heard it right: Kala as a painter stands before her colleague from the 18th century. Such place gave her spoken meta-artistic substantiality creatively motivated with use of paint and canvas. Kala, certainly, never rationalized such acknowledgement. For inside her acts power of will that doesn’t care for knowledge. What is it that she wants?

Using the language of Ernst Bloch, Kala’s alluding to something that “can’t bear itself”, and it still manifests as non-painting. It is identity that seeks self  somewhere “before painting”, not in the sense of time, yet in ontological disposition. “It” cannot be expressed through words, but it can be seen, as in paintings by Jackson Pollock. It is the will to start “from the beginning” in art of painting, from that “before”, that precedes “something” as “nothing” that expels its own void. Kala’s artistic “yes” is pronounced before what still “is not”, still not recognizable… Pollock proved that in painting nothing is interesting except the tendency toward it, opposite to Tiepolo’s saturation with “having the painting”. Kala feels only hunger for painting.

What is called Art today, retreated somewhere behind “willing, sensible, representative and known” (Bloch), that for centuries and millenniums     h a d, or presumed to have. This is precisely what is sought today for the first time. Like a dawn of the first day in the history of Art World. That pre-having, Kala, like before her Pollock, Hartung and Mathieu did, senses in nameless intensity of desire. She wants that only possible – to elevate that intensity higher, only if it could convey from her painting onto others…